I think every mother wants to positively reinforce their children’s good behavior.  If you are like me, when you see bad behavior it is something you automatically “hone in on” – to correct it instantly.  Positive behaviors, on the other hand, often don’t get the same amount of attention.  We expect  our children to do certain things and act a certain way, and that is our job as parents to teach them.  Here is a great way to make a big deal out of good, positive behaviors and kind actions that your children choose to do on their own!  “Whooo’s been good” is a little surprise jar that we have in our house for when I catch the kids doing something unexpected and totally awesome! 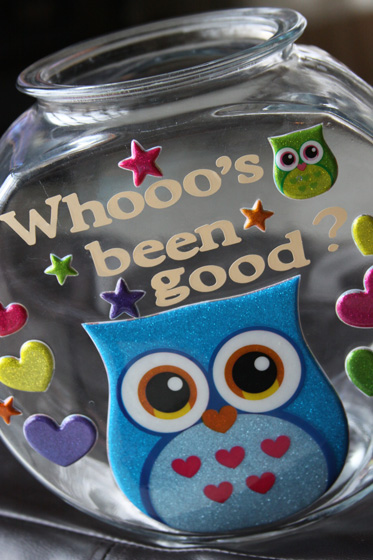 Since my kids were toddlers  I can remember daily walking away from the things that I was doing to tell them that their behavior was inappropriate.  I would drop what I was doing whether it be cooking dinner, exercising, folding laundry, having a conversation, or cleaning up and have that little discussion about what I expected instead.  I certainly am glad that I took lots of time when they were very small to do that, but I now find myself with two preschools who rarely need a time-out or talk about right and wrong.  They know the drill when it comes to hitting fitting, or disrespectful attitudes – thank goodness.

I now am noticing that, once in a while, they surprise me with something amazing instead.  Every now and again I catch one of them being overwhelmingly kind, thoughtful, and just plain good!  As these moments have become increasingly common in our home, I realized something.  While I would give them the thumbs up from the stove while cooking, or tell them good job and high five them I wasn’t making nearly the effort to reward their positive behaviors as I was correcting the bad behaviors.  I always say something, but rarely stop what I am doing to tell them why it was such a kind act or explain why I was so proud of them, or more importantly why they should be proud of themselves.

Now…I am not talking about the moments when I ask them to clean their rooms or brush their teeth and they do it, because those are behaviors that I expect them to do without me having to ask a hundred times.  I am talking about those special moments, where of their own free will, they choose to do something good, kind, helpful, or nice.  The other day while I was doing some homework with my son I noticed my three year old busily running around the living room tucking all of the toys and blankets back in their places.  Another day when my daughter was very sick and hovering over the toilet my five year old brought her a glass of water.  Stuff  like that!  When I hear that my son did something outstanding at school for a another kid or when he chooses to let his little sister go first.  When my daughter remembers all on her own to wash her hands after she uses the potty or chooses a positive way to react to a negative situation at preschool I can be reminded to stop and take time to reward their good choices.

Not only is a great way to get them excited to behave, but it is a great reminder for me to take the time to positively reinforce it!  When they do something extra good and out of the ordinary – I walk away from what I am doing to take them to the reward jar.  In the process I find that I am having a conversation with them about why it was good and how glad I am that they choose to be nice! 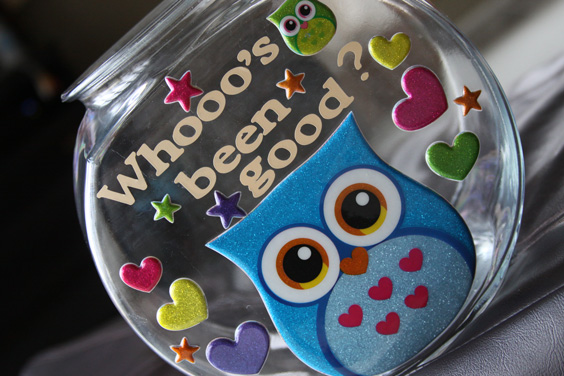 I first saw this idea on Pinterest with the wording “Caught ya bein good”.   The original post about the reward jar is from Wolfelicious and was used in a school classroom as a way to positively reinforce expected behaviors of students.  She added a slip of paper with the students name on it each time they were caught being good and then drew names for special privileges from the jar.  I liked the thought of it so much that this was how I found a way to incorporate the idea into our home.

So here is how I made this cute little reward jar.  Sadly our family fish of 5 years passed away a few months ago leaving us with an abandoned fish tank.  Oh, don’t worry – the hubby decided it was time for a small aquarium and another fish, which only means that I have added cleaning a nasty fish tank every few weeks to my list of things to do.  Anyway…we already had this sweet little fish tank, which I cleaned really well before I began the project.  You can pick them up for just a few bucks at a pet store or even Walmart, or find one at a thrift shop and clean it up.

I found the sweet owl stickers in the scrap booking/office section at Target.  They were just the right size, color, and fun design to fit my reward jar idea.  Once I knew what stickers I was going to use I came up with the phrase  “Whooo’s been good?”  to finish it off.  I cut out of vinyl with my Cricut machine.  You could just as easily grab a package of letter stickers from the scrap booking section and add any phrase you like! 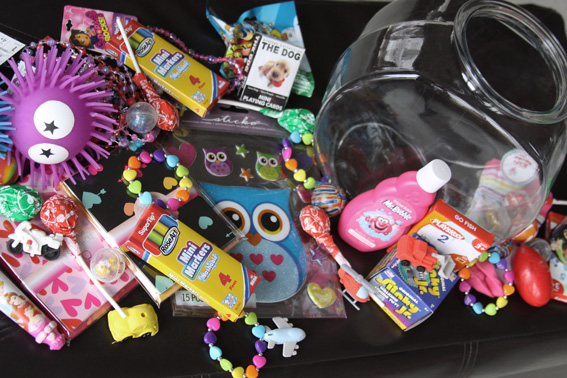 I then set out to find a few little surprises to fill my reward jar with things that I knew my kids would get really excited about.  I was able to get some great clearanced out “stocking stuffers”  at 90% off and hit up the dollar section and party supply section of target for everything that I needed.  Usually for Valentines Day I get them some items like this and I had planned on unveiling this idea to them as their Valentine’s Day surprise (because I would be getting these things for them anyway).  I wanted to see how the first few days went before I shared it with you so I unveiled it to them a little early, but it would make a great surprise for your kids this valentines day!

I filled our jar with fun little items like: 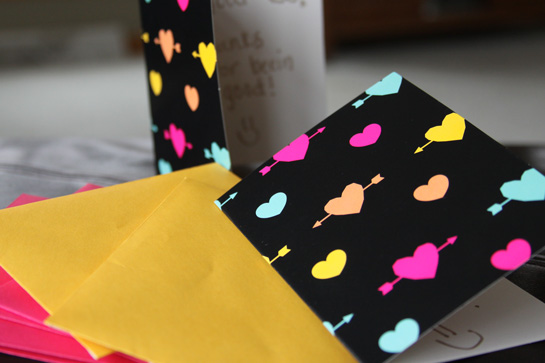 I found the cards in Target’s dollar section – I think 8 for $1.00.  It was fun to come up with little  surprises to write in the cards for them as well as I note about how they did a good job.  They each got a certain color of envelope so they knew which ones pertained to them.  Here are a few of the privileges that they can earn from the Whooo’s been good jar: 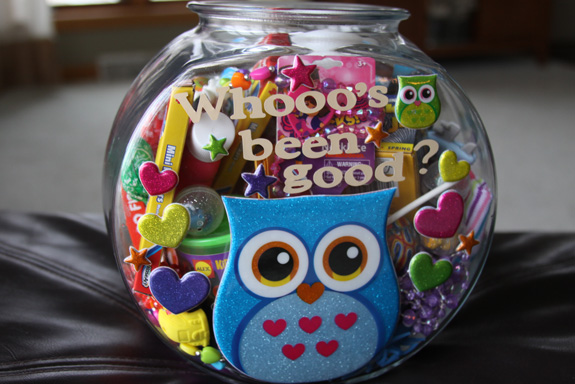 Their eyes just about bugged out of their heads when I showed them the treat jar and the “ooooed and awwwed” at the little owl on the front.  They had a blast investigating the prize stash and trying to decide what they would pick first.  Once they were introduced to the jar we had a long talk about how they could receive a “Whooo’s been good” surprise. 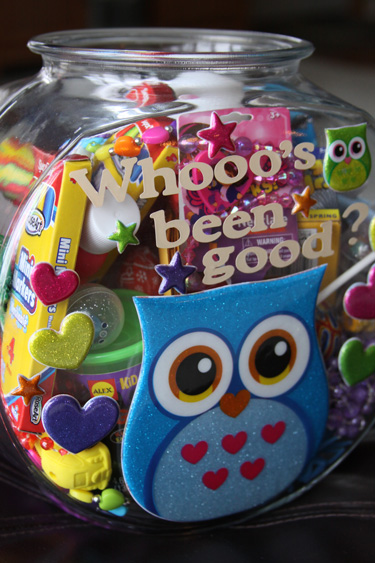 They were told that they can not ask for a prize from the jar and  should basically forget that it is there.  They would get a prize and I would say “Whoo’s been good” if they displayed a behavior that was above and beyond what we expect of them on a regular basis.  This was not so easy for my three year old to grasp, as she would follow me around, bat her eyes at me, and tell me she would share her drink with me – hoping to coax a surprise out of me.  Slowly she is getting the whole idea, and I do love her enthusiasm.  I knew they would spend the first night just wandering around the house trying everything in the book to get a prize, so I put a limit on it – one prize per day for now.  I think after it isn’t so new – it will work just right.   I will have a super fun way to reward their good behaviors that are done of their own free will on any given day.  We placed it up high in a place where we can all see it, but only mom and dad can reach it.  It is a great daily reminder to them that doing something kind is a good thing, and an even better reminder for me as a mother to take time to compliment the good as well as correct the not so good.