Turn an inexpensive oil drip pan from a automotive store into a magnetic princess land that your own little princess can play with for hours on end.  It allows for hours of interactive princess.  Encouraging imaginative play, storytelling, and lettwe recognition make this toy not only super fun, but educational too.

This do it yourself project is well worth the effort for your little lady. 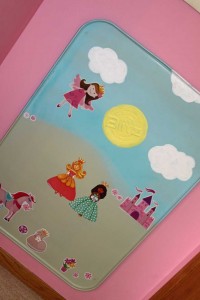 Last summer I came up the idea to create a stop and go light magnetic board for m son’s room using pizza pans.  He enjoyed his so much that I couldn’t wait to make one for my daughter as well.  The kids both love to play with magnetic toys, and I love using magnetic letters and numbers as a fun way to teach spelling and counting lessons while we are playing together.  I had been dreaming up a very girly version of his magnetic board for my daughter’s room,and I am so thrilled with how it turned out.  More importantly, she is thrilled and has spent hours rearranging her magical princess land. 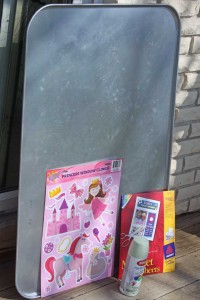 The whole project started with an oil drip pan that I spotted while aimlessly walking around an automotive store with the hubby.  I was entertaining the kiddos as he took care of some actual automotive care shopping.  Normally these types of stores bore me to death, and I feel like we are there for hours, even though it has only been a few minutes.  Entertaining two kids in the isles, and not letting them wreck anything, is a painstaking process.  As we were wandering the isles I spotted a huge metal looking “pan”.  I had no clue what it’s actual purpose was, but knew that I could turn it into something really fun for the kids and it was only $13.00.  Come to find out it is a pan that catches oil while you are working on a car, but I immediately saw it has a giant magnetic board or chore chart for the kids.  It had a small lip around the edge and was just the right size for the kids to have some fun with their magnets on it.  My vision was to paint a simple “scene” onto the pan as a backdrop for some princess and fairy magnets. 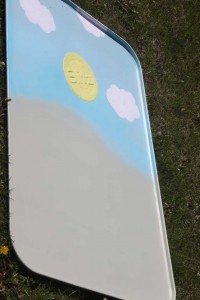 I took the pan outside and painted two layers of a light celery green spray paint on it.  I already had the paint from a previous project, and I always like to use things that I have around the house.  I also had a can of baby blue spray paint that I thought would make a perfect combination with the green for a sky and grass.  I painted the blue over the top of the green after it was dry and added a hill to make the scene a little more interesting. 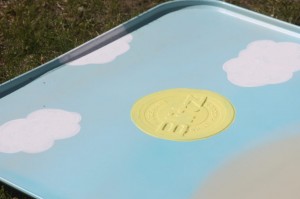 I debated stopping at this point, but thought that a few clouds and a sun in pastel colors would really finish the princess scene off nicely.  I used some acrylic paints that I had on hand and hand painted 2 and a 1/2 clouds randomly placed in the blue sky.  I also used a yellow paint mixed with some white to create a pale yellow sun in the center of the pan.  Unfortunately their is a stamp on it right in the top center of the pan.  I toyed with leaving it alone so that it didn’t stick out too much , but decided that the round stamp would make the perfect sized sun.  Since magnets don’t stick to the textured stamp very well I thought the sun would be a great addition to the scenery.  That way the sun is always out shining on her princess land!  I added a layer of matte clear lacquer spray over the top of the finished scenery to protect the paint job.

I also created the princess magnets using things that I already had around the house.  I used sheets of magnetic printer paper that I had leftover from my magnetic family mission statement.  It had been laying around the house for some years, and I was happy to find a reason to use it up.  The princess images were a combination of stickers and wall decals.  Both of the sets were found at the Dollar Tree and were a great deal.  For $2.00 I was able to make all of the princess magnets that you see on the board and way more.  The stickers were very easy to convert to magnets.  All I had to do was peel and stick them to the magnetic paper and cut them out.  The wall decals required one extra step, but were still very simple.  I used a can of spray adhesive and sprayed the magnetic paper with it so that the decals could stick to it.  I let the spray dry and then cut the images out the same way. 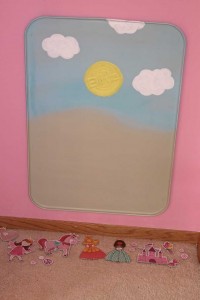 Once all of the pieces were finished I used double sided mounting tape to attach the pan to the wall in my daughter’s room.  She has a little nook in her room next to her closet that the door opens into.  It is the type of space that can’t really be used for anything except for when the door is shut, so that was the perfect spot for her new princess magnet board.  I mounted it with the tape onto the wall at a height that allows her to play with it standing up, or sitting down.  The pan is about the same height as her, so she loves that it is “life sized” for her. 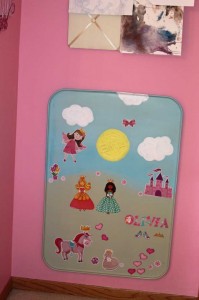 The unused wall in her room has now transformed into not only a place to display her artwork, but a place where she can get creative and use her imagination for hours on end.  The magnetic characters include princesses, fairies, flowers, jewelry, a kitty, horse, a castle, crowns, hearts, and all the letters of the alphabet.  Everything a little girl needs to tell the story of any princess.  Her very favorite thing to do is make up stories using the characters,  We lay them all out on the floor, and then add one character at a time coming up with a fairytale type story as we go.  She really gets a kick out of it, and once I tell one story, she usually likes to come up with her own.  I love that it evokes imaginative play, and storytelling from her little three year old mind. 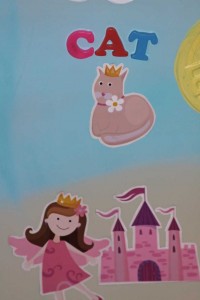 I also like to incorporate some educational activities into the mix when we are playing so I use magnetic letters and numbers (also from the dollar store) to label and count things.  I put flowers in a row, and ask her to pick the number that she sees, or we work on how to spell simple words, letting her find the letters and try to put them in order. 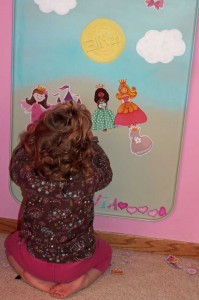 This is one of those toys that encourages her to play and learn while using her imagination in her own space.  She sits for hours rearranging things, and talking for the little characters.  I love that it is cute, simple, and educational.  My hope is that she will be able to have this in her room for many many years, and just use it in a different way as she gets older.  If she gets sick of the princess theme I can easily change that magnets and have a whole new look.  I kept the actual pained scenery simple for that very reason.  I can change it to animals, or dress up as she gets older.  She can also use it as a magnetic memo or photo board as she gets even older too.  I always want their rooms to be filled with things that are fun, functional and that have purpose.  This has all of that, but also encourages her creative side.  It is a great addition to the decor in her room and is an even better quiet activity for her to do by herself or with others.