So, I’m sure you have seen these adorable ice cream cone cupcakes out there before.  They are pictured on cake mix boxes, and make cupcakes extra special.  Some years ago I tried making these on a few occasions, and was terribly disappointed at their final appearance.  Of course, they never looked as pretty as the ones on the cake mix packaging.  When my little girl told me that she wanted to take these to school as her birthday treat, I was determined to make them a success.  Not only did they turn out yummy, but I made two different versions that were as sweet and adorable as my newly turned 4 year old princess!  This post will give you lots of great tips on how I made these from preparing, baking, decorating, storing, and even transporting 2 dozen ice cream cone cupcakes!

I hope you are all still with me, and not boring of my birthday related posts!  This is one of the last three that I wanted to share with you before moving on.  I have to have it fresh in my mind so that I can post the most accurate descriptions.  First I want to be clear in telling you that I bought a simple boxed white cake mix and prepackaged frosting.  You can read about the plethora of treats that I made all in the same week, so simple and fast was key for me.  I have made white cakes from scratch, and sadly have not found a recipe that seems to be any better than a store bought cake mix – so… that’s what I went with. 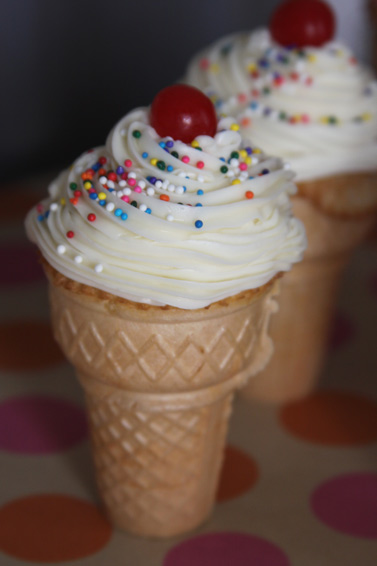 In doing a little research online I found this great tip for baking these cupcakes from Steph’s Bite By Bite.  She suggested that you make the cupcakes as normal, but then stick an ice cream cone on top before baking.  In previous attempts I had tried baking them standing up surrounded by foil for stability and that was a total flop, literally.  This sounded like a great plan to me, and I was stoked to give it a try.  Boy, was I pleased with the results!  Not only was it way easier, but I had perfect cone cupcakes to decorate in the end. 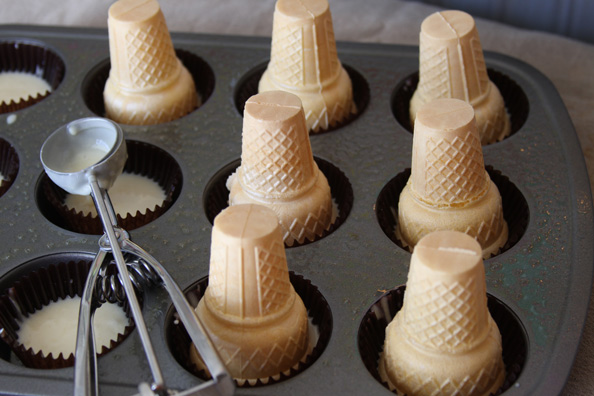 Here is what I did:

First I sprayed my cupcake pan with nonstick cooking spray

I used one scoop per liner and did my best to drop the batter into the center in hopes of keeping the side of the liner fairly clean from batter.  (You may be able to get away with adding a little more batter than this – but this is what I did) 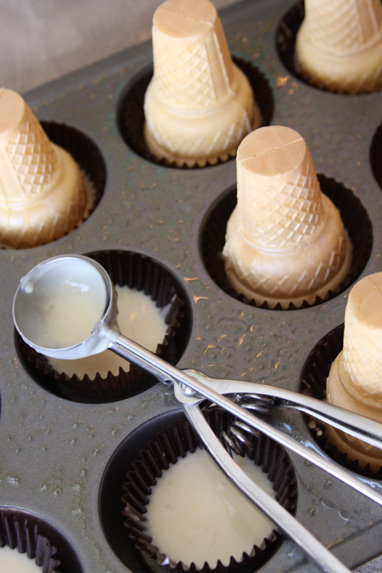 I then carefully added one flat bottomed ice cream cone to each liner.  I softly twisted it from side to side as I pushed it a small amount into the batter at the bottom of the cupcake liner.

I then baked the cupcakes with cones on top in the over at the temperature recommended on the cake mix package for muffin tins.  I watched them carefully to make sure they did not get overcooked since I used less batter than I would have for a normal cupcake.

When I removed the cooked cupcakes I was left with this. 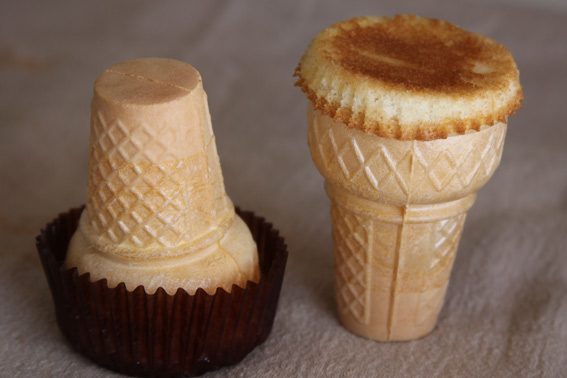 It is then key to let the cupcakes cool some before removing the liner!  I tried to remove one immediately and it tore must of the cupcake off of the cone.  If you wait 10 minutes or more you should have a much easier time. 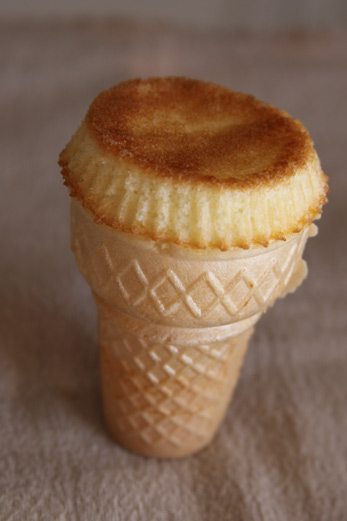 After removing the upside down cupcakes from the pan and waiting for them to cool the liner pulled of perfectly clean.  I had the perfect flat base to decorate any way I wanted.

The little lady wanted princess inspired cones so I went with a pretty pink frosting for some, and decided to make a few “boy friendly” white ice cream cones as well (o.k. it was just for fun for my sake). 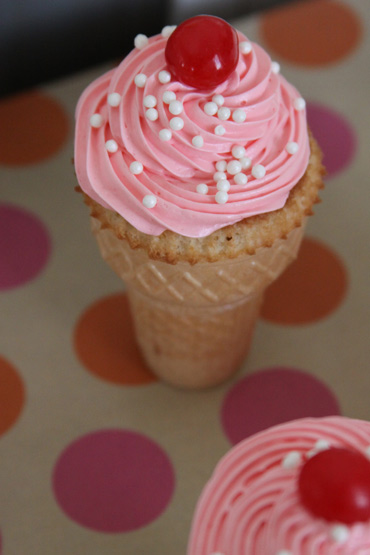 First thing was first. I opened up a can of frosting and then put it in my Kitchen Aid mixer and whipped it for a few minutes.  I had seen a tip from Do It And How  on making your frosting go further and thought I would give it a try.  Not only did it work for that, but it seemed to lighten up the prepackaged frosting enough so that it was really easy to work with.  It was light, fluffy, and worked really well for making a nice tall pile of frosting “ice  cream” on top of the cupcakes. 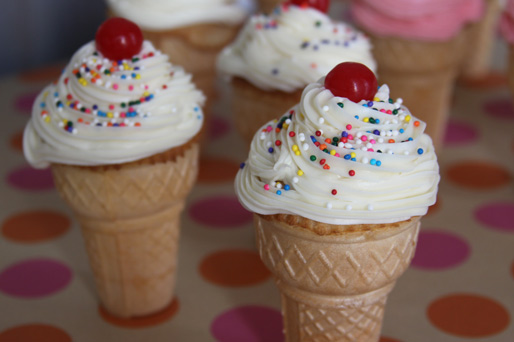 I added the whipped frosting to a piping bag with a cake decorating tip on the end and got to work decorating the cupcakes.  At first I tried decorating them straight on the counter, and found it hard to make a nice neat swirl without knocking the cone over, so I devised a plan that worked beautifully. 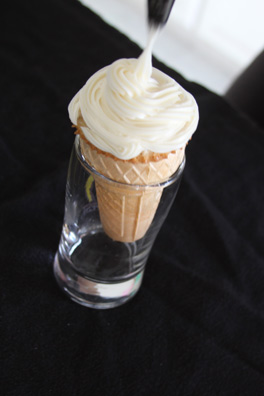 I found a small juice glass in the cupboard that the cone could sit in without tipping too far.  The mouth of the glass was wide enough to fit the base in, but not for the largest part of the cone to fit through.  It was the perfect holder so that I could pipe on the swirl without losing the cupcake in the middle.  I started on the outer edge of the cupcake and worked my way to them middle, squeezing a little harder as I got to the center to create height. 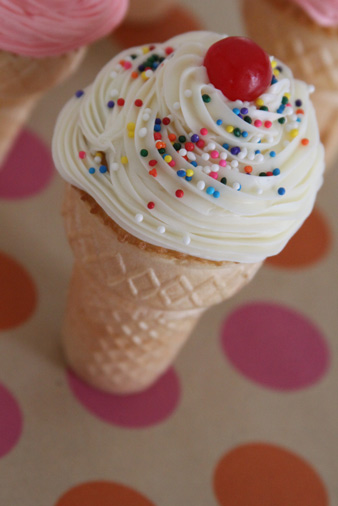 I then added colorful sprinkles to the white cupcakes and topped it with a chewy cherry sour candy.  It added the perfect touch to make these ice cream cone cupcakes look just right.

I took a little different approach to decorating the pink cone cupcakes and topped them with some little pearly white sprinkles. 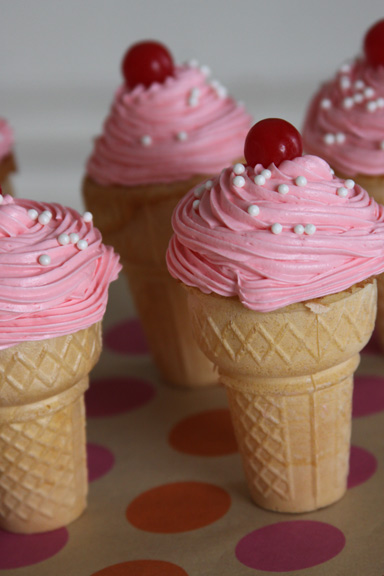 With a cherry on top, of course. 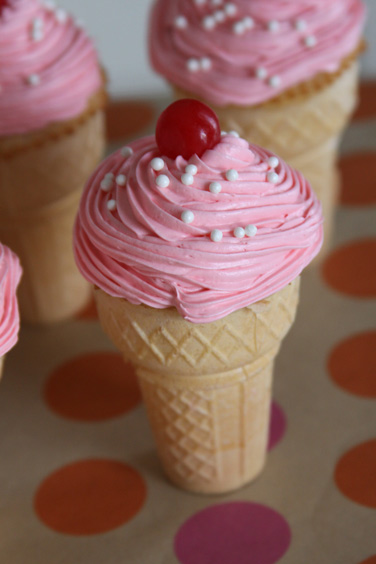 Perfect, beautiful…lovely!  And then I realized that I now needed to transport two dozen of these little beauties to my daughter’s preschool (insert scary music here).  Luckily the hubby was home to help me devise a plan, and together we got to work engineering the first ever ice cream come cupcake carrier (they probably already make something for this don’t they?) Well this is the first time I have ever seen one anyway. 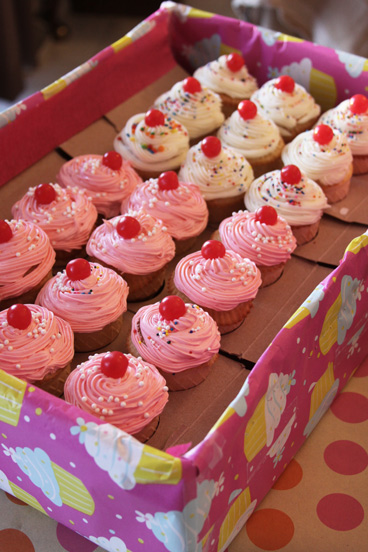 We grabbed a cardboard box that would fit all of our cupcakes and cut it down a little so it wasn’t too terribly tall.  I then wrapped it in pretty birthday paper.  Then we cut apart the sides of the ice cream cone box, which happened to fit almost perfectly across the width of our box.  We used a scrap booking circle making tool to punch large holes into the sides of the ice cream cone boxes.  We stapled the sides of the cut box lengthwise into the cardboard box and then covered the staples with tape and crepe paper.  Each one held 6 cupcakes perfectly.  I happened to have the correct size punch, and the cones fit through until they got to the widest part of the cone on top.  The ice cream cones sat securely in the holes that we punched because the cones were on the bottom of the box, and supported from tipping by the circles punched in pieces of cut cone box.   It worked surprisingly well, and was a fun way to make these darling treats travel so well.  I covered the box in saran wrap and then added a birthday balloon to the box.  It was like delivering a little present to school for her on her birthday, and I hope it made her day extra special.

Leave a Reply to Ling Cancel reply
Follow Me