I spotted some giant floor pillows in the Pottery Barn kids catalog a while back that I thought were so fun. They looked warm and cozy, soft and comfy!  Would you believe they were $119.00.  No way!  So I set out to create my own on a budget.  I like them even better than the original ones I spotted in the catalog and the kids use them daily! 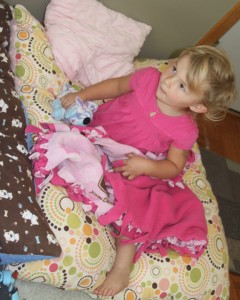 I was at JoAnn fabrics and got a great deal on some super soft fabric.  I wanted to make the pillows reversible and super comfy for the kids.  I was checking out the clearance section, and found some minky fabric (used often for baby blankets) with circles in blue and with hearts in pink.  I also found some cute novelty fabric on clearance.  I got a yellow, green, pink and brown circle pattern for our daughter and a brown and white puppy pattern for our son.  I bought 2 yards of each fabric witch ended up being about $18.00.  The minky fabric must have been a little wider because I had a little fabric left when I lined the two fabrics up to start sewing.  I used the extra fabric to make little pillows to match. 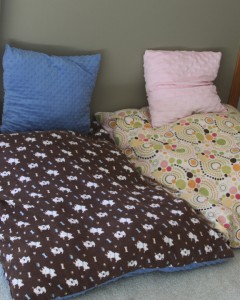 I literally just faced the fabrics backwards, one on-top the other, and sewed around the edges leaving a space to stuff the pillows.  I used a regular strait stitch and then went around again with a zigzag stitch to reinforce.  I knew these pillows would take some abuse, and didn’t want the seams to rip.  I then stuffed the pillows with filling that I found at Hobby Lobby.  I found one huge bag that was about $20.00.  I also had a beanbag at home that had been spilled on and I couldn’t wash.  I cut the bean bag open and used the filling to add to the pillows.  I love the mixture of stuffing and synthetic beans.  They are soft and fluffy but the beans help the pillows mold right around the kids when they are laying on them.  I have seen that you can buy the synthetic beans at craft stores too.  I finished by sewing up the stuffing hole and that’s it! 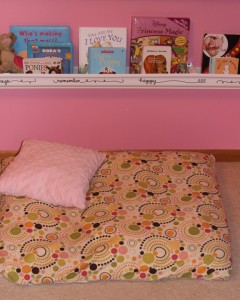 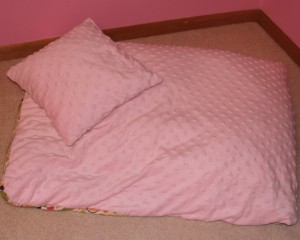 These pillows are perfect for the kids reading spots in their rooms, are awesome to curl up in on movie night, great in bed to use to sit up and read, are often landing pads for couch jumping, and are even good for sleepovers.  This summer we even used them out in the tent for camping night!  We use them constantly, and my hubby even steals them when he’s watching the game on the TV!  They are just the right size for the kids to be really comfy, but not too big to move around the house easily!  I have washed them in the washing machine with success as well.  These pillows make great gifts and can be customized  for any child.  Just pick their favorite character and with a few stitches and stuffing you have a great snugly over sized pillow.  Compared to the $238.00 (not including shipping) I could have spent on two floor pillows, $38.00 doesn’t seem so bad!

Categories: Do It Yourself, Fun for Kids
Leave a Reply Cancel reply
Follow Me