This year’s Halloween costumes are done, and my little ones are sporting some cute new DIY costumes.  I dislike the thought of spending ton’s of money on cheaply made Halloween costumes, so I always like to make my own.  This year Princess Toadstool and Toad from Super Mario were the final choice, and the kid’s play the part just right.  For about $25.00 total I was able to create two totally unique and adorable costumes. 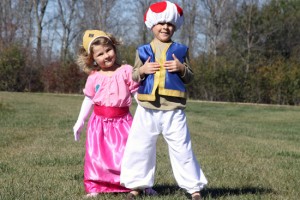 So first of all, I’m happy to finally have their costumes done…and judging by the pictures I got, so are the kids.  Last year’s DIY angry bird costume, and princess Rapunzel tutu costume were a hit, and I couldn’t wait to tackle this years selections.  My son decided that he wanted to be Toadstool from Super Mario brothers and my little lady (obviously to impress her brother) choose to be princess Toadstool.

I am not certain how he convinced her of this over a Disney princess, but it turned out pretty adorable.  Anything princess makes her happy, so princess Toadstool was a-okay with her.  I’m not sure if she should be called princess peach or princess Toadstool because I am no Mario expert – but for this post we will stick with Toadstool! 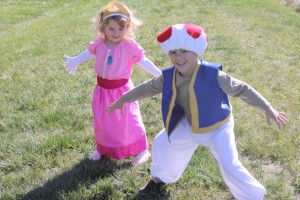 I decided on the costumes and was able to find everything that I needed between Goodwill, the Walmart craft section, and our own stash of Halloween stuff.  I wish that I could give you a step by step tutorial on these costumes, but I always make it up as I go with no rhyme or reason for how I put it all together.  I will give you a rough run down of how I made them. 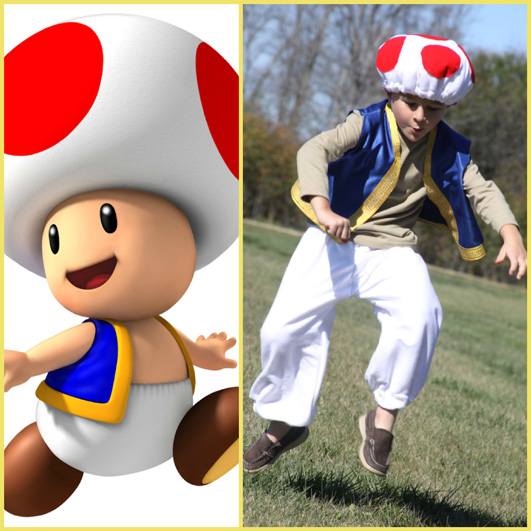 I used this image of Toadstool as my inspiration for my son’s costume.  I found a costume at familygo.com that was great inspiration as well, but had very few instructions to follow, so I made up by own way of doing it.  Here is a breif run down of the process that lead me to the finished Toadstool costume.

I cut 2 circles 20inches in diameter from white fabric.

I laid a layer of batting cut slightly smaller than the size of the fabric circles and laid it between my two fabric circles (making sure the red circles would be on the outside layer.

I sewed another ring about 1/2 from the outside of the circle leaving an opening to insert elastic.

I used a small amount of blue satin and sewed a simple vest from a pattern I scored at a thrift store for about 25 cents.

I found the trim from Walmart on clearance for $2.50 and bout two small rolls.  I then used it to lign the finished vest

I used fabric that I had on hand to create some Toadstool pants that are slightly puffy at the bottom.  I used a tutorial for making easy pajama pants that I have used many times but cut the legs wider and added elastic rings to the bottom.

I found the flesh colored longsleeved t-shirt by Cranimals at Walmart for $4.88 and my son had the shoes already 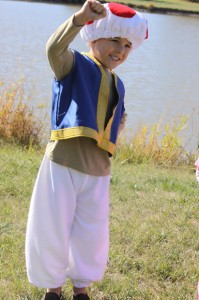 The entire costume ran me less than $15.00 because I had a lot of the fabric and the shoes on hand.  Not bad for a cute costume that makes my little man really happy!  I love that he can wear the shirt after Halloween, and that the rest of the pieces are comfortable, cute, and will make great dress up fun pieces after Halloween over. 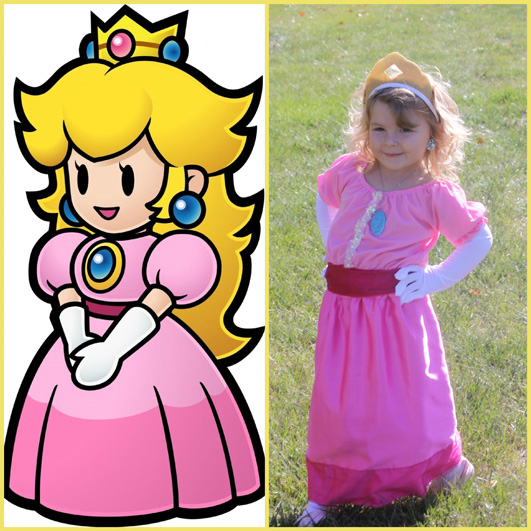 I used this image of Princess Toadstool to come up with my daughters costume.  I wanted her costume to be comfortable and easy for her to move around in.  I totally lucked out and found a pink princess dress up dress and crown at Goodwill for $2.00 which is the top of her costume and her crown.  I think it may have been a Disney Sleeping Beauty costume or something.  It was all made from the light pink fabric, had a gold trim up the center, and was long sleeved when I started.  I first hemmed the dress to fit my daughter and then sewed a tulle inset around the outside of the dress to add some volume.  I also turned the sleeves into short puffy sleeves.  I added a piece of pink glittery trim to cover the gold up the center of the dress and then made an elastic waisted pink satin skirt to put over the bottom of the dress.

I sewed a sash to the top of the dress to hide the elastic skirt so it looked like one piece.  I found the satin at Walmart for really inexpensive as well as the glittery pink trim, and tulle.  I lined the bottom of the satin with the tulle to fancy it up, and also put a slit in the back of the skirt with it.  Her whole costume ran me only about $10.00 thanks to the finding the pink princess crown and dress that I was able to transform into princess Toadstool. 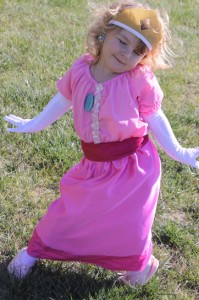 The necklace came in a pair of earrings from Goodwill which I took apart and added to a chain.  We had the gloves in our Halloween dress up box at home, and the earrings are old costume jewelry that we already had.  Finished of with a cute pair of ballet slippers, my little princess makes a pretty convincing Princess Toadstool.  Her crazy hair seems to fit the costume just right too.  She pretty much has not taken this costume off since I finished it and is thoroughly enjoying playing the damsel in distress who needs to be saved by her big brother or “Toad” as she calls him. 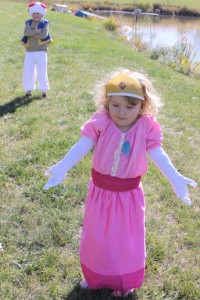 They were so funny while I took the pictures – playing the parts better than I could have asked them too.  These costumes are going to be fun for a long time to come and I see a lot of hours of playing Toad and Princess in their future!