Earlier I shared with you my Yogi and Boo Boo Halloween Costumes that I made for our kids.  When our family was invited to a Halloween dress up party I was excited to add  Ranger Smith and Cindy bear to the mix.

We had a great time at the party and the kids loved that we were dressed to match each other.   My husband dressed up as Ranger Smith and I dressed up as Cindy Bear (Yogi’s girlfriend in the cartoon).  Let me just say my husband was a trooper and dressed up for the party, even though he doesn’t like to.  However, I was unable to coax  him into dressing up with us to get some pictures – so unfortunately I had to play the role of both for the photos.  But at least you can get an idea of how the family would look all dressed up in Jellystone attire! 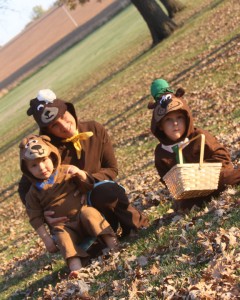 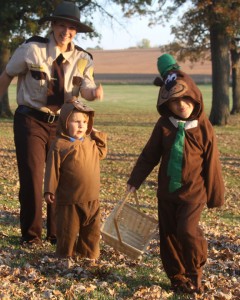 The Ranger Smith costume was adapted from a police officer costume that we got at Halloween Express.  It had all the right colors and a hat that fit Ranger Smith perfectly.  I removed any cop badges, and gun holsters, and added a few ranger touches.  I appliqued a name badge that said Ranger Smith on the right side of the shirt.  On the left side I added a badge in the same shape that the Ranger Smith cartoon character had.  On the left arm I added a Ranger tree badge just like the in cartoon. 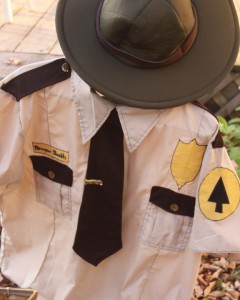 I created the Cindy Bear costume in the same manner that I made the Yogi and Boo Boo costumes using an applique technique.  I had a brown jogging suit that I used to attach the bear face to.  Because I still wanted to be able to use the jacket – I did not applique the face right to the hood.  I attached it using safety pins.  I also attached the ears using safety pins and added a little flower like the one Cindy Bear wears.  I had a yellow bandana that I used as Cindy’s scarf. 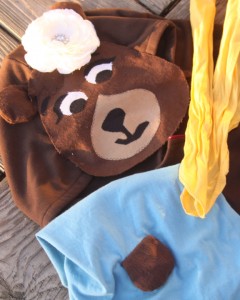 The last addition to the Cindy Bear costume was a blue skirt that I found at Goodwill for a couple dollars.  It was the perfect blue color to fit my costume.  I sewed a little bear tail to the back of the skirt and wore it over the jogging pants.  I totally enjoyed chasing my little Yogi Bear around the Halloween party as Cindy Bear. 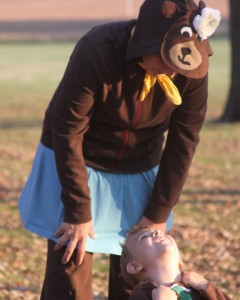 Categories: Do It Yourself, Fun for Kids
Leave a Reply Cancel reply
Follow Me