Here are some step by step instruction on how I created my son’s Black Angry Bird Halloween Costume.  This is a totally unique, comfortable, and adorable costume that you can create with very little money!  I promise your little boy will love you for it. 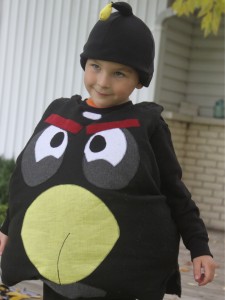 The very first thing that I did was lay my 2 yards of black felt fabric out on the floor.  I literally had my son lay down and traced his shape and size onto the fabric using a piece of chalk.  His waist was on the bottom of the fabric when I did this because that is where I wanted the costume to stop when he was wearing it.  His arms were straight out so I could decide where to put the arm holes and where the straps should sit. 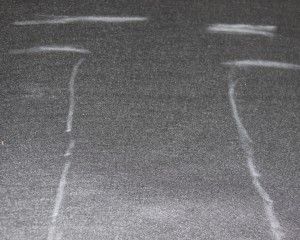 I then drew a rough outline of an angry bird in the shape that I was hoping the costume to have.  Drawing the eyes and beak helped me figure out where the shape of the bird should round out a little.  Notice I drew the straps up higher than where my sons arms hit.  This is so I had room for my seam allowance. 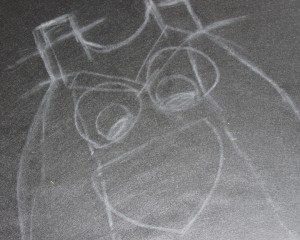 When I was happy with the shape that I had I folded my drawing in half to ensure that the cut out fabric was even on both sides.  I also folded the entire length of fabric in half so that I could create the back of the costume at the same time in the same shape.  I left a little rectangle at the bottom off of the bird shape where I would be attaching my Velcro to close the costume when finished.  I also cut a little triangle out on the opposite side (where the front and back side are attached) to allow for easy movement when wearing the costume. 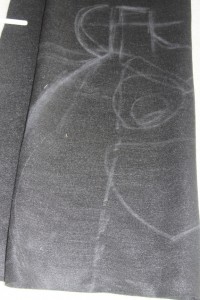 Here is what you should end up with after you have folded you fabric in half and then folded your drawing in half and cut around it.  Notice the rectangles on each side to allow for Velcro.  Next I took the entire piece of fabric and laid it onto the leftover felt fabric and traced it.  I cut out another piece of felt that was the exact same as this one.  That will be the inside of your angry bird costume. 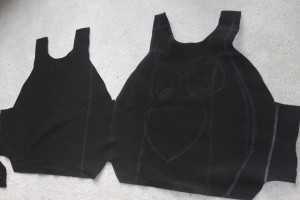 Find a picture of the bird you are creating and enlarge the image so that it’s features are the size that you would like on your costume.  You should only need to print out one eye and one beak.  I used this picture for the left eye and then flipped it over and traced it upside down to make the right eye and eyebrow. 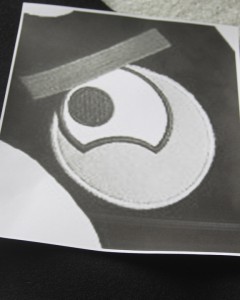 Cut each piece of the eye out separately and label with what color you want them to be.  .  This is what you will use to applique the face onto the felt that you have cut out. 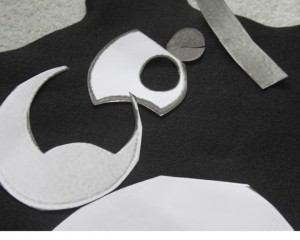 Using this applique fabric tutorial add heat n’ bond to the back of each piece of the bird’s face.  Using this technique you add the features of the bird piece by piece.  Start with the bottom layer and iron it on.  Then add the next layer, until you have your entire bird face ironed onto the felt. 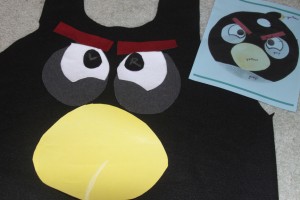 Next you can use your sewing machine to outline all of the features and make the line going up the beak.  I use a zig zag stitch and black thread.  If you use a Heat n’ Bond that doesn’t require sewing you can easily cut this step out if you want to, but I like the way it looks to have the features outlined. 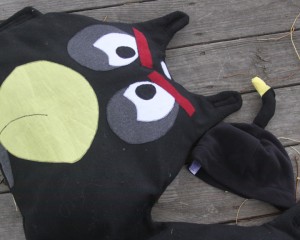 Lay your felt bird over a strip of quilt batting and use it as a guide to cut out your batting in the same shape.  I got so involved when I was making the costume plush that I forgot to take picture, but here is how I did it.  I  laid my finished bird face up on the table and laid my second piece of felt cut with the  bird’s shape over it.  Next, I put the batting on top  so that it lined up with the other pieces.  I pinned all three layers together and pinned around the shape.  I then sewed almost all the way around the shape.  I left a good sized spot (about 6-8 in) at the bottom of the bird to pull the costume right side out. 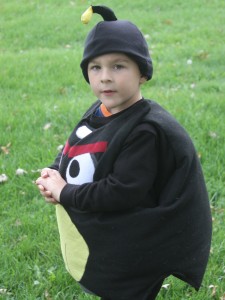 After I turned the costume right side out I used a bag of filling to stuff the bird to the desired size.  I made it a little fuller at the bottom than at the top so it looked nice and round like an Angry Bird.  When you are done stuffing you can sew up your hole that you left by hand or with your machine. 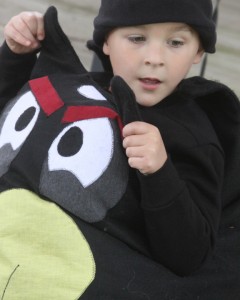 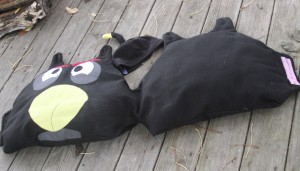 To create the hat I used my seam ripper to open the stitches in the top of the hat.  I sewed a small piece of yellow fabric to a curved piece of black fabric to make the shape of a bomb fuse.  I sewed it together but left the bottom open, stuffed with a little filler and pinned it into the hole that I had made in the hat.  I turned the hat inside out and re-sewed the seam that I had opened with the bomb fuse in it. 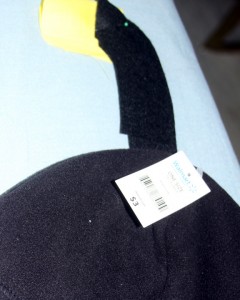 Your angry bird costume is complete!  For just a few bucks you have the seasons coolest costume that your little one will LOVE to wear!

10 Replies to “How To Make An Angry Bird Halloween Costume”