Spending hours in the garden with the kids can be a treat when the kids have a space that lets them explore.  Making gardening fun for the kids helps gardening stay fun for me at the same time!  With the addition of a kid friendly space in the garden we created a fantastic teepee for the kids to play in and for some plants to climb on.  I in-vision it covered in bean and pea plants and the kids sitting inside snacking on fresh vegetables come the end of summer.  Our teepee was constructed with large branches, twine, and string to give the kid’s play area a fort that still looks natural out in the garden.  Then the kids decorated around the teepee however they wanted to make their space their own.  Now we wait, and see how well our teepee works as an aid for our plants!

This weeks posts have been all about gardening with the kids.  Earlier I shared our grill to garden storage cart that the kids are decorating, and then I showed you the simple stump tea table that we made.  All of these things are really making this years garden fun for the kids.  The final touch to the garden’s kid friendly space was a teepee that we built that we hope… will be covered in beans and peas by the end of the summer.   I originally got this idea from a post about a Pole Bean TeePee hideaway from Jimmy Cracked Corn.  Her tepee was constructed with poles, and definitely more straight and perfect than ours.  Because I didn’t really want to spend any money on this kids space, and I really wanted it to look natural and rustic, I opted to use things that I could find out around the property. 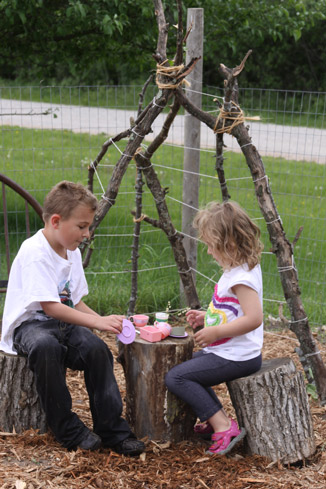 We ended up with a charming little teepee fort just the right size for the kids to sit and hideout inside throughout the summer.  It is the perfect homey space for the kids to sit and play together while I till, weed, and water.  This was a super easy project and the best part is, that it didn’t cost a cent.  While I prepared the space in the garden the kids set out with the hubby to collect some branches that we could use to make the teepee. 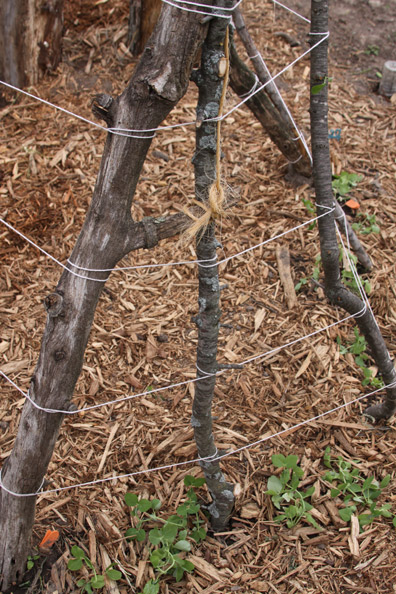 I tilled the area and made sure it was ready for plants first.  Then once the family came back with the sticks/branches that they discovered we were ready to construct our teepee.  Sadly everyone disappeared for this part and I was left to construct all by myself, but I think it turned out alright.  I started by drawing a large circle in the dirt with my boots.  This was used as a guide for placing the branches.  I then began arranging the sticks together, propping one up with another.  Had my family stuck around this might have been a little easier with someone holding things together, but I managed.  It took a couple tries to find an arrangement that worked, that was circular in the end, and that was most sturdy.  My odd shaped branches definitely complicated the process a  bit, but in the end I love how it looks in the garden.  It’s certainly not perfect, but it is the rustic fun element that I was hoping to achieve. 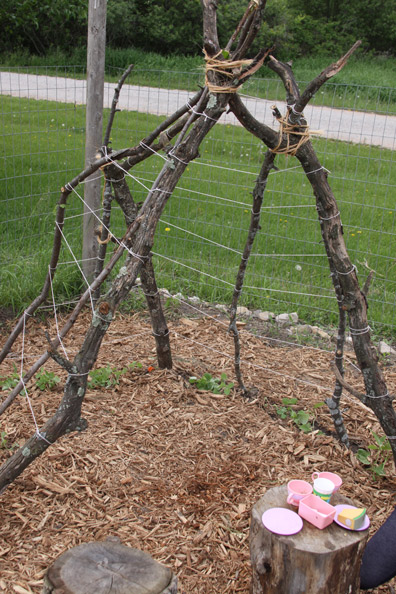 After arranging the sticks together I secured them first with binder twine on the top.  Knowing full well that my kids can be destructive and a bit careless at times, I made sure to do a lot of extra securing!  I even lifted each branch and dug it into the ground so that they were all firmly stuck in the spot they were given.  Once each stick was dug in and the top was secured, and then secured again, it was time to add the string for the plants to climb up! 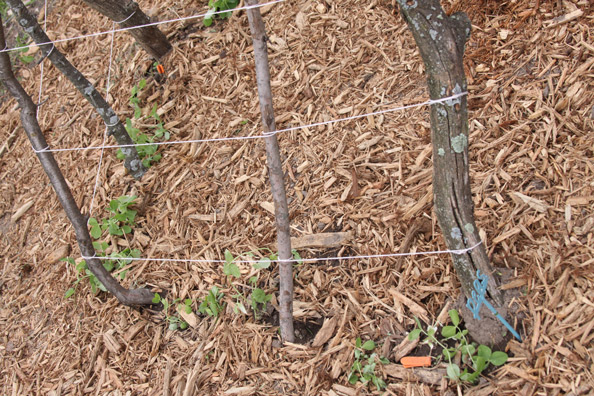 The kids came back to help with this step, and they were mighty impressed with my structure when they returned.  Big smiles from them equals a happy mom.  I tied a string to the one side of the teepee’s doorway and then began wrapping the string around each stick until I was around to the other side of the doorway.  The kids stood in the teepee and I handed them the roll of string to wrap around each branch and then they passed it back to me.  We repeated this process until we hand strings less than a foot apart all the way around the teepee (minus the doorway of course). 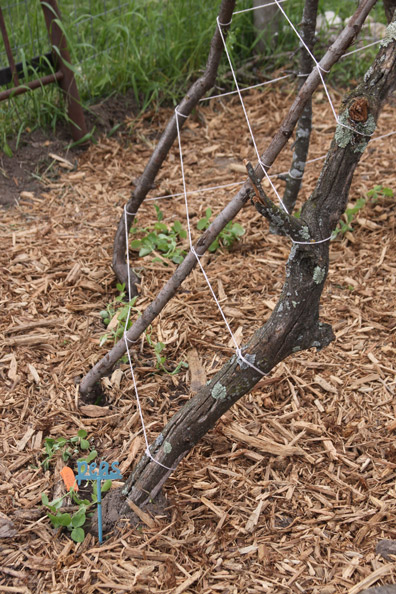 Then it was time to get planting.  The kids had started some bean plants in the spring as well as some sugar snap peas (my favorite) that they used around their teepee.  We started on one side adding pea plants around the base of the teepee and on the other side we added bean plants.  We then added mulch around the whole space so the kids could play without getting totally caked in dirt. 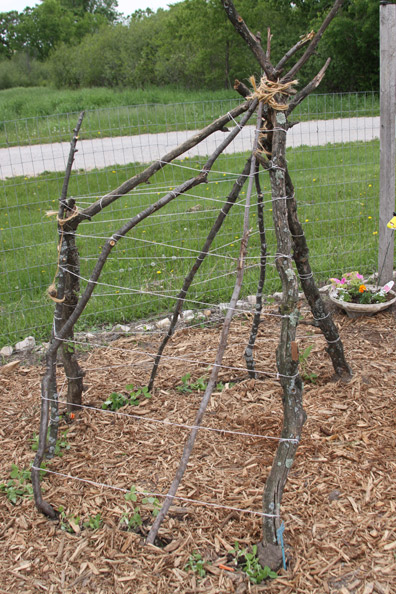 Our hope is that the plants will nicely climb the strings of the teepee throughout the summer to create a really cool fort.  It is the kid’s job to water the bean and pea plants around their teepee, and they are taking great pride in caring for their space so far!  They each even got to pick out some flowers to plant on each side of the teepee and they are allowed to decorate with whatever they want to.  I have a few great project ideas up my sleeve that I will share throughout the summer that will allow the kids to create more decorations for their space! 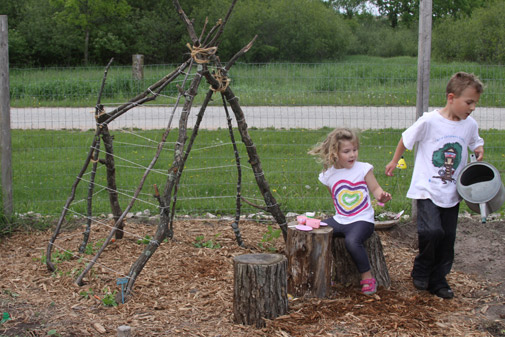 The teepee combined with the stump tea table  has really turned into a fantastic little space for the kids to play! We will keep you posted on how this looks throughout the summer!  We are really excited to see how it turns out.